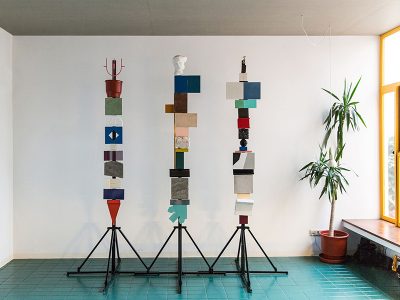 Point Supreme’s stubborn commitment to reality ends up in the production of accurate and constantly updated lists of things including all sort of elements: islands, chairs, fruits, animals and mountains. These visual lists operate at all scales, making no difference between rooms and cities, trees and forests, stones and mountain ranges. Point Supreme’s lists combine interiors and exteriors, public and private, geography and architecture. Within these lists different scales are combined in order to describe the contemporary metropolitan condition: subjects move in the cities followed by their personal collection of objects and public spaces are the product of the accumulation of these different personal collections. The city described by Point Supreme seems to be made of innumerable components. Public and private spaces have no clear boundaries within these careful lists: the house is a museum and the museum is a house, the table is a public space and islands are tableware (expert from Systematic Surrealism by Pier Paolo Tamburelli in ‘Athens Projects’, Graham Foundation, Chicago 2016)

Point Supreme was founded by Konstantinos Pantazis and Marianna Rentzou in 2008 after working in London, Rotterdam, Brussels and Tokyo. Point Supreme regularly publishes self-initiated studies and projects for Athens, the city where they are based. Their research and projects for the contemporary city was exhibited in the Greek Pavilion at the Venice Architecture Biennale in 2012. That year they were included by popular Greek newspaper LIFO among the 20 most influential personalities in Greece. They are currently nominated for the Iakov Chernikhov Prize and are included in Wallpaper* magazine’s Architects Directory for 2015. ‘Athens Projects’, the first book dedicated to their work was published as part of the Treatise Series in 2015 by Graham Foundation in Chicago.