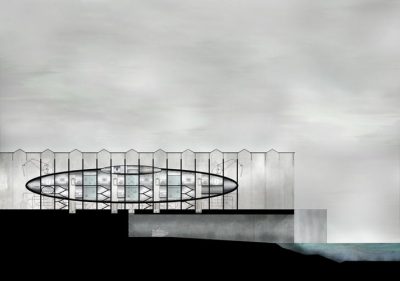 Focusing on a defunct submarine wharf in the Port of Rotterdam, students in the Masters of Interior Architecture and Retail Design program at the Piet Zwart Institute explored whether interior design can give way to urban redevelopment. As part of last fall’s [X]City studio, students proposed a spectrum of redevelopment strategies for the wharf, varying from commercial to artistic to recreational.

The projects imagine the interior world of the wharf as embodying an urban system beyond its boundaries, creating an “interior city” that both informs and enriches the outside reality. Phrasing interior design as city-building requires reinterpreting interior architecture’s goals, and how they’re evaluated. Interior architecture is primarily interpreted based on economic impact, as whether the “return on investment” justifies the project’s existence —  urbanism plays by completely different rules, where establishing ROI is based on a much fuzzier capital. [X]City tries to reconcile these rules, to create an interior space as nuanced and rewarding as its surrounding city.