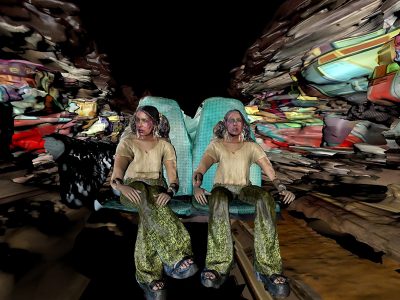 The Master in Interior Architecture: Research + Design at the Piet Zwart Institute in Rotterdam is proud to present the work of nine of its 2020 graduates.

The nine projects on view in this online exhibition were produced in the middle of a crisis so disorienting that it was not immediately clear how many different times we would all try to get back to normal. A year later, their work is presented on a platform that, we hope, honors the complexity with which they responded to that moment and the courage it required of them to continue to produce.

The context for this exhibition is obvious. For MIARD’s MA candidates, this context required a constant negotiation between off-line and on-line, between the room and the screen. It required a reconceptualization of the ‘interior’ on an unprecedented scale and temporal intensity. This context continues to require translation between the logic of each individual MA candidate’s design process and flatness of the online space in which we are all obliged to appear to one another.

The 2020 MIARD Graduation show—like the work it presents—takes place in two dimensions at once. It takes place between a room in a repurposed building in Rotterdam and an online space designed by Studio Folder. The viewer will see a number of installations set up throughout a large windowless room. The space was filmed using a 3D camera and then installed as a navigable 3D space online. Each installation was conceived by the alumni in collaboration with the curators to represent the logic of the graduation project. The installation does not present the work itself but rather a translation back into real life space of project that was made to be shown and defended online at the end of the summer term in 2020. To explore a project, click the hotspot to see fragments of each candidate’s work.

Building
Odeon Building, a former theatre and cinema in Rotterdam built in the 1920s. Since then, it has served as a school, sports hall, community centre, and freelance studio spaces. It is about to be demolished in summer of 2021.