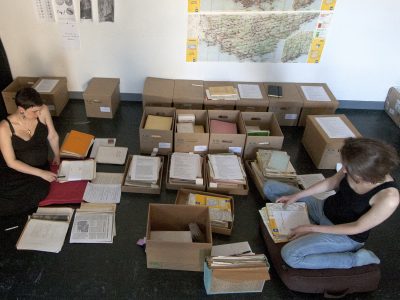 Marie Ilse Bourlanges and Elena Khurtova will present their practice as a visual artists duo, zooming into various projects and processes. They will also introduce their current research, entitled “The Sky is on the Earth”, subject of a residency at Atelier Holsboer in Paris, with the support of the Mondriaan Fund. The project explores the archive of the enigmatic Jacques Bourlanges (grand-father of Marie Ilse), author of an intriguing theory of a correlation between the stars constellations and constructed geography.

The practice of Khurtova and Bourlanges has been directed by what they like to call “a challenge to the regime of utility”. The question they strive to raise is what use may mean outside the restrictions ordinarily set by function and consumption; in short, is there a use that is not exhausted by utility? Posing this question, their work develop the opposition into a manifest ‘play between the two’: what remains ‘after use’ is no waste, but a memory that adds something to the object’s story as well as a prediction that adjusts the very conditions of its utility.

From 2009 onwards, Marie Ilse Bourlanges and Elena Khurtova have been working together as a duo. Both sharing a background in architecture, they decided to join forces in a structural way and merge their expertise in textile and ceramics. They are currently teaching Material experimentations at the Inter-Architecture department of the Gerrit Rietveld Academie and at the Interior Architecture and Furniture design department of the Royal Academy of The Hague, for which they co-curated their latest show in Milan.