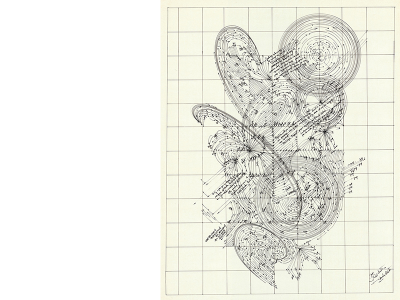 Piet Zwart Institute, Master of Interior Architecture and Retail Design [MIARD] invites you to our mini symposium: Speak about what you know; Draw what you cannot speak about just yet.

Join us for a conversation with Hetty Berens, Riet Eeckhout, Mariabruna Fabrizi and Esjieun Kim. The public talks will be moderated by Ephraim Joris.

Currently, we can witness a renewed interest in the architecture drawing as well as in other modes of spatial representation within creative practices. Not since the alternative architectural drawing styles of the 1960s and early 1970s has the drawing played such a key position in the expressive construction of knowledge. As the practice of the spatial designer continues to shift, so does the system of communication needed and desired by the practitioner to conceptualize, develop, share and build critical positions.

The use and temporal nature of these current systems are in flux as new media, networks and paradigms continuously pollinate and affect contemporary culture, radically modifying former conventions while unearthing new modalities. Does this renewed interest in drawings reassign ‘value’ to the medium and restore the drawing as a credible channel of knowledge?  In what ways can the architectural drawing emancipate itself from its historical orthodoxy, to shape and advance spatial discipline(s) today and in turn recalibrate the visual form itself?

This event is part of the newly re-imaged Multiple Media curriculum thread at MIARD. Introduction by Edwin Larkens.

Bios:
Hetty Berens, PhD, is an architecture historian. She is an expert and conservator at Het Nieuwe Instituut. She is responsible for the Architecture collection of the Institute and for the Sonneveld House Museum. In the Instituut she participates in exhibitions, lecture events and student projects.

Riet Eeckhout, PhD, currently holds a research and teaching position at the University of Leuven in Belgium. From 2002 till 2007, she worked as Design Director for Dr. Ken Yeang at T.R.Hamzah & Yeang in Malaysia and Llewelyn Davies Yang in London on the design and conceptualization of bioclimatic skyscrapers and large-scale developments. Riet was a partner of Architecture Project in London from 2007 till 2015 (http://architecture-project.com/). In 2014, Riet concluded a PhD titled ‘Process Drawing’ within the invitational program at RMIT University in Melbourne, Australia, led by Leon van Schaik, investigating a practice of drawing.

Mariabruna Fabrizi and Fosco Lucarelli are two Italian architects, assistant teachers of Theory of Architecture at the EAV&T Marne-La-Vallée (Paris) and curators. They are currently based in Paris where they have founded the architectural practice Microcities (microcities.net). Currently, they conduct an independent architectural research through the web site SOCKS (socks-studio.com) and are content curators for the upcoming exhibition ‘The Form of Form’ at the Lisbon Architecture Triennale 2016.

Esjieun Kim, a Partner of Bunker-Palace Architecture office in Paris. She has been working with PCA Architecture, Cigüe and Didier Faustino then in the fields of contemporary art, design and interior design, while working on her own artistic production she exhibited in Japan, United States and France. She has been invited as residence artist by Center for Contemporary Art in 2012 (Ki­takyushu, Japan), Berlin and Rio. She received her master from Ecole Spéciale d’Architecture (ESA), entitled ‘Visionary Architecture’ tutorial by Sir Peter Cook (Crab studio) and Ricardo de Ostos (Naja&De Ostos).

Moderator: Ephraim Joris, PhD, is a partner of the international architecture practice Architecture Project with which he produces work in renovation and restoration practice. Ephraim concluded his PhD at RMIT University evaluating the idea of an architectural phenomenology recasting history as the experiential content of speculative architecture outlining the research method as reflection through projects. He is co-Director of program at the faculty of Architecture at KU Leuven University.